8 Things to Know About the Enhanced CPF Housing Grant 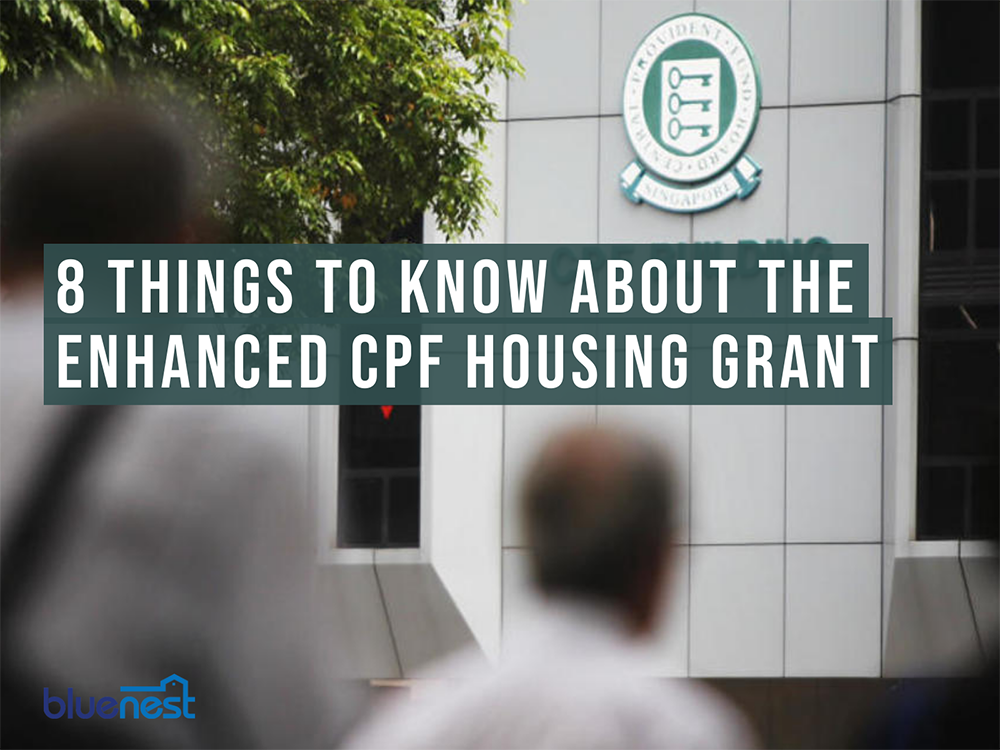 Prior to the change on 11 September, 2019, these were the three main grants:

Now, though, these three grants have been simplified into a single Enhanced CPF Housing Grant (EHG), with up to $80,000 in subsidies available to buyers regardless of whether you go for a resale flat or BTO.

The restrictions on flat type and location are also gone, meaning you can now put your CPF Housing Grant toward a resale flat in a mature estate!

Today, we’ll answer the most common questions about the new changes:

[Editor’s Note: This article has been updated to reflect the revised age requirement for citizens marrying foreigners under the Non-Citizen Spouse Scheme, w.e.f. 26 October 2019.]

1. How does the CPF Housing Grant work?

The CPF Housing Grant is a government subsidy provided to eligible Singapore Citizens and Permanent Residents.

The amount is deposited directly into your CPF account and is used to offset the purchase of your HDB BTO or resale flat upfront. (That means you can’t get it in cash, nor can you let it sit in your CPF account to accumulate interest.)

The grant is meant to help first-time buyers get a home that’ll last them for life. If you sell your flat later on, you’ll have to put the entire grant amount with accrued interest back into your CPF. You may also have to pay a resale levy if you’re going for another subsidized flat after letting go of the first one.

Effective 11 September 2019, you qualify for the Enhanced CPF Housing Grant as long as you’re a:

The grant you’ll get depends on your household income. The more you earn, the less in subsidies you’ll get.

Since HDB’s goal is to help first-timers buy a home that will last them for life, you’ll only get the full EHG if your flat’s lease can cover you and your spouse until the age of 95. If you purchase a flat with a shorter lease, you’ll still get the grant, but it’ll be pro-rated.

The eligible age for Singapore Citizens marrying foreigners has also been lowered to 21 (from 35 years old). If you fall in this category, you could potentially get up to $40,000 under the EHG provided half of your household income is no more than $4,500/mo.

3. What does this mean for the BTO/resale HDB market?

In 2019, about three quarters of all first-time HDB buyers opted for a BTO over a resale flat. This led to long queues and intense competition for BTOs as well as a slowing resale HDB market.

The Enhanced CPF Housing Grant (EHG) is the government’s response to this. The EHG does benefit BTO buyers, but the real beneficiaries of the change are those who previously could not afford a resale flat.

In short: if you can find a resale flat near your parents’ place, it might be a more affordable option than going for a brand new BTO elsewhere.

However, the new changes will also increase demand for BTOs. Previously, first-timers who wanted to maximize their grants were limited to four-room flats or smaller in non-mature estates. With the newly simplified EHG, you’ll get up to $80,000 in grants regardless of your flat type or location.

4. How will this affect my chances to get a BTO?

Sadly, it might not actually matter that much. The EHG will likely increase the demand for BTOs, so you might have to contend with even more competition now.

HDB has stated that they’ll increase the supply of BTOs in 2020, but for now, it seems that they’re trying to push first-time buyers toward the resale flat market.

5. What about HDB grants for single citizens?

The new changes also benefit you, but only if:

Grants aside, the monthly income ceiling for 2-room Flexi flats has been raised to $7,000. This means if you happened to earn $6,000 before (putting you just out of reach), you can now submit a BTO application as a Single Singapore Citizen.

6. What about the Proximity Housing Grant?

This remains unchanged as an additional perk for those going for a resale flat. As long as you live with or near your parents (within 4km), you’re entitled to up to $30,000 (Families) or $15,000 (Single Citizen).

7. With the higher income ceilings, is this a good time to go for an EC?

It really depends on the Executive Condominium (EC) you’re looking at! For instance, in 2019-2020, we’ll see the launch of the Sumang Walk EC and Anchorvale Crescent EC. These are located in Punggol and Sengkang respectively.

Prices for units at the Sumang Walk Executive Condominium range from $1,000 psf onwards, while those for Anchorvale Crescent will likely be in the $900 psf range.

ECs also have MOP restrictions compared to private condominiums, so keep this in mind if you’re planning to sell the unit sometime in the future.

8. If I already applied for my flat, will I still get the extra subsidies from the Enhanced CPF Housing Grant?

Sadly not. HDB has confirmed that there will be no retrospective application of the Enhanced CPF Housing Grant.

That said, if you submitted your flat application before 11 September 2019, you’ll still have access to the previously available grants (CPF Family Grant, AHG, and SHG).

Meiling is an American-born Chinese living in Singapore. As a property owner herself, she enjoys doing research into the local real estate market and making highly technical topics easy to understand for readers. In her spare time, Meiling enjoys going for a long run or snuggling into her armchair with a good book.

Marrying a Foreigner? You May Be Eligible for $40,000 in Grant